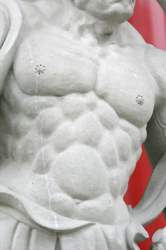 Along with the female form, what is attractive in male appearance has also undergone numerous influences, some bizarre, some extreme in nature. Fads and fashions have come and gone. It has taken a long while for the classic male form to resurface in popular culture, but it finally has.

Clothing habits and religious traditions have kept the male body under wraps for most of the past 2,000 years. In early Christian times, Rome ruled most of the known world, and everyone wore togas. The wealthy over-ate; the poor were undernourished.

Only attractive servants and gladiators ran around half naked. While most depictions of gladiators show them semi-armored, the male abs are almost always exposed. Servants wore knee length tunics that covered the chest. Nothing to see there.

During the formative years of Christianity, only religious images were commissioned or preserved. Seeking to avoid lustful thoughts and deeds, men and women hid their attractiveness under long garments and head scarves. Self denial was the rule and images of emaciated saints, long suffering, or innocent and chaste women were created.

With the advent of Islam, Muslims embraced the established values of Christianity and Judaism, and they, too, covered the body. Women added the face to the list of things you shouldn’t expose in public.

During the Italian Renaissance, great thinkers and artists abounded. Looking for the ideal, or the divine, in the human form, artists and sculptors resurrected the classical themes. Hundreds of pieces of art survive – presenting poses in every degree of nakedness, and attesting to the beauty of the human form. Great statues, such as Michaelangelo’s David, were created.

The Renaissance did not last long, and Western Civilization quickly covered itself, again. European tradition was carried to the New World by way religious escapees, and continued in that state until this very century.

Not since the times of Greek heroes and Roman gladiators have so many men bared there bodies, especially those male abs, in public.

The Greeks revered the human form in its full development. They copied it and emulated it, carving their Gods as images of the human ideal. The Classical Greeks, who were notoriously self-righteous, even admired the body outside of their people. Nowhere could they find it more developed than in the warriors who fought as mercenaries for them, or sometimes against them, called the Gauls. Today, we often call them Celts.

Modern weight lifting competitions base their standards of development on the Greek forms of perfection. If you think otherwise, just examine a copy of the statue of the Dying Gaul. It was not only one of the most expressive pieces of sculpture ever made, it is a tribute to every man who aspires to develop his body to its fullest potential – with strong sinuous legs, a full set of pectorals, and glorious male abs.

Although the ancient Greeks may have been the first civilization to publicly appreciate male abs, they’re probably here to stay.

1 thought on “The Classical Look of Male Abs”